Transmediality of "Quo vadis": From novel to mass-culture phenomenon 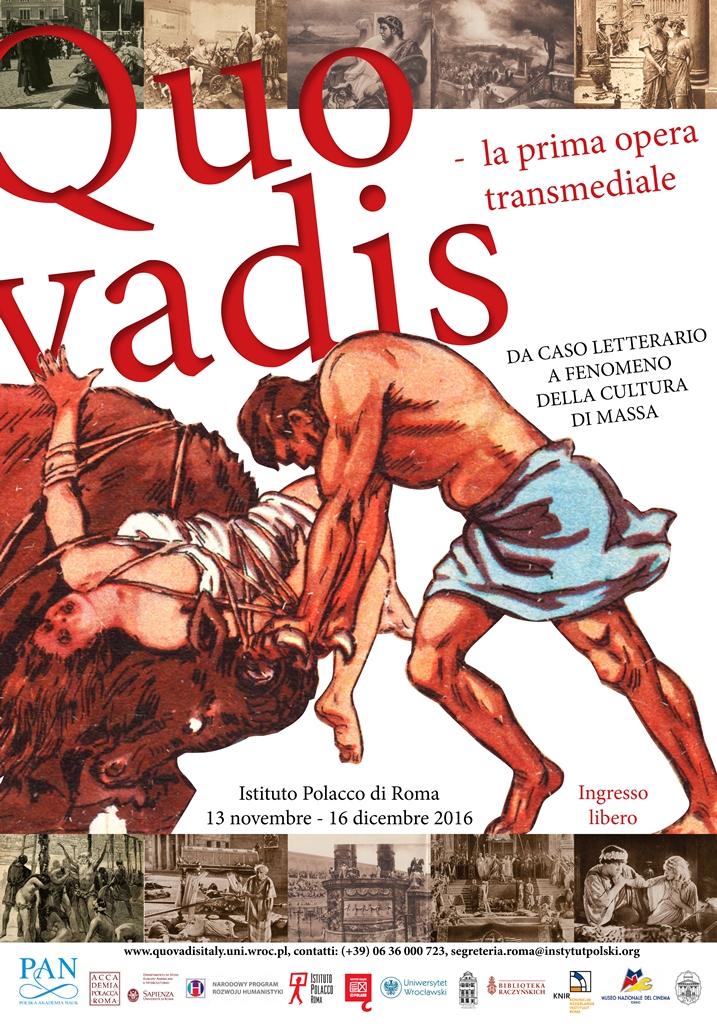 One of the events of Rome’s Sienkiewicz Year celebrating the centenary of Henryk Sienkiewicz’s death, the exhibition show cases the multidimensional and comprehensive influence of Sienkiewicz’s novel on various arts (film, music, painting and theatre) as well as on popular culture. The exhibition programme also features a number of additional events, such as an international conference on the place of Quo vadis in 20th-century culture (14-15 November) and screenings of film adaptations of the novel (13-16 November).

The exhibition aims at offering an overview of the immense popularity of Sienkiewicz’s Quo vadis in Italy. At the turn of the 19th century, the novel was among the readership’s favourites; it later made it to the school canon and boasted the status of young adults’ beloved reading for a long time to follow. Also multiple screen adaptations of the novel gained enormous success. The work proved so attractive to Italians not only because its action is set in Rome, but also because its most famous adaptations were filmed in the Eternal City (Guazzoni 1913, D’Annunzio 1924, LeRoy 1951, RAI series 1985).

The exhibition features a number of panels exploring Henryk Sienkiewicz’s life and work, his connections to Italy, the  genesis of the novel and its success in Italy and worldwide. A separate section of the exhibition shows screen adaptations of Quo vadis. It includes, among others, movie posters and stills from all the films (1913, 1924, 1951, 1985, 2001), therein unique and yet unpublished shots from the set of the MGM production (courtesy of Turin’s Cinema Museum and private collectors). Part of the exhibition examines the reverberations of Quo vadis in other arts (e.g. in theatre and music,) and in mass art: comic strip books, postcards, advertising and adaptations for children. The highlights of the section are, undoubtedly, the original plates for the 1981 comic strip lent by the cartoonist Rodolfo Torti, photos of Silvano D’Arborio’s stage adaptation (1901) and a bronze statue of Lygia on the horns of a wild bull (from a private collection).

A range of multimedia are also on display:

A documentary on the making of 1951 MGM film

The exhibition is organised by

supported by the Polish Book Institute,

The exhibits on show are courtesy of:

Many exhibits come also from the private collections of: